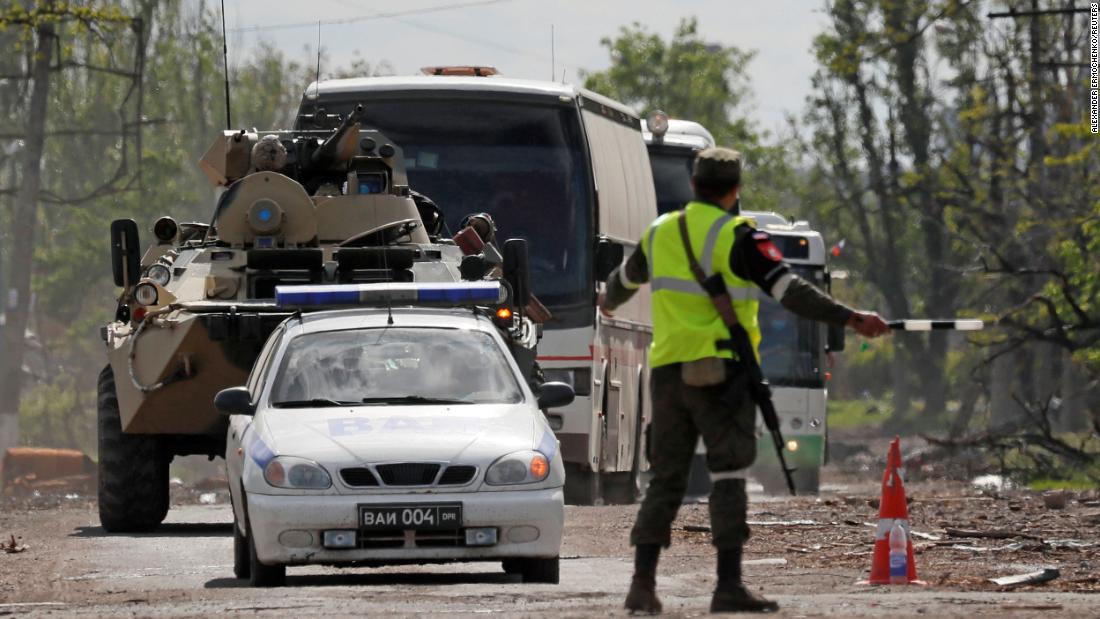 The ​researchers say these ​sites are used by Russian forces ​and their allies to process, register, interrogate and detain Ukrainians trying to ​leave Russian-occupied territory. ​Those detained can include civilians and prisoners of war.

According to the report, there is evidence suggesting they were set up even before Russia’s invasion of Ukraine began and grew following the capture of Mariupol in April.

“The conditions reported by those released from the facilities examined here can constitute cruel, inhuman, and degrading treatment under international humanitarian and human rights law,” the study says, adding that the “conditions include overcrowded facilities, a lack of access to adequate sanitation, insufficient food and clean water, exposure to the elements, denial of medical care, and the use of isolation.”

“In some specific instances, the treatment described as having been endured by those released, such as use of electric shocks, extreme conditions of isolation, and physical assault, may potentially constitute torture if proven,” the study says.

​In a separate press release Thursday, the US State Department described the “unlawful transfer and deportation of protected persons” described in the study as “a grave breach of the Fourth Geneva Convention on the protection of civilians and constitutes a war crime.”

Volnovakha Correctional Colony is one of the ​​sites described in the study. Detailed ​findings allege it is a long-term facility for those who didn’t pass filtration ​along with prisoners of war who surrendered after the Azovstal steel plant siege.

The study notes the accounts of apparent survivors who described among other things: overcrowded cells, forced labor and even torture. Yale HRL says it identified two areas of disturbed earth along the south and southwest sections of that facility which appear to be mass graves. ​

An account cited in the report ​from someone described as a “survivor” also claimed a cellmate had been working a shift digging graves inside the colony. In July there was a deadly explosion there ​in which Ukrainian separatists say 53 POWs were killed, but the satellite images ​used for the report predate this.

The Yale study notes that “without further investigation, including the ability to independently excavate these locations, no definitive determination can be made about what these sites may contain based only on the evidence ​in this report.”

Earlier this year CNN spoke to a number of Ukrainians who went through “filtration” and described facing threats and humiliation during the process. They say they were asked about their politics, future plans and views on the war. ​Some ​of the people ​who spoke to CNN said they knew of others who had been picked up by Russian troops or separatist soldiers and disappeared without a trace.
The Kremlin has denied using so-called filtration camps to cover up wrongdoing and targeting civilians in Mariupol.

In the Yale study, the Russian Embassy in Washington said the system “is about checkpoints for civilians leaving the active combat zone. In order to avoid sabotage operations by the Ukrainian nationalists’ battalions, Russian soldiers carefully inspect vehicles heading to safe regions.” It adds that it will “detain bandits and fascists” and that the Russian military does not create barriers for civilians but helps them by providing food and medicine.

In CNN reporting from July, Dmitry Vaschenko, an official with Russia’s Ministry of Emergency Situations in Taganrog, said housing would be given to Ukrainians, who were also free to seek work and send their children to school.

“When hostilities end in the future, all these arrivals can make the decision to return to their homeland. Whoever wishes to remain in Russia, the Russian government takes such an obligation — they will receive a full range of social services and are protected,” he said.

When asked about the process to allow refugees into Russia, he said there were “filtration points” on the border.

“They are checking people who appear aggressively disposed towards the Russian Federation,” he said. “Filtering occurs precisely upon arrival, there are no ‘mass camps.’ They are border-crossing points, nothing more.”

The self-declared DPR has denied accusations by Ukrainian authorities of unlawful detentions, filtration and maltreatment of Ukrainian citizens and said that those arriving at what it calls ​”reception centers​” are properly fed and provided medical attention.

“The Donetsk oblast filtration system run by Russia and their proxies represents an urgent human rights emergency,” Nathaniel Raymond, executive director of Yale HRL said in the ​press release from the Yale School of Public Health. “International monitors need unfettered access to these facilities today. Every day that passes without independent monitors being present in these locations increases the risk that grave human rights abuses may be occurring with impunity.”

According to the study​’s methodology, “each source was evaluated using criteria established by the Berkeley Protocol on Digital Open Source Investigations.”

It added that data points “were cross-referenced against recent very high-resolution satellite imagery. Five independent sources had to corroborate a site’s location and the filtration activities alleged to occur there for the site to be included in the report. Twenty-one sites met or exceeded that threshold.”