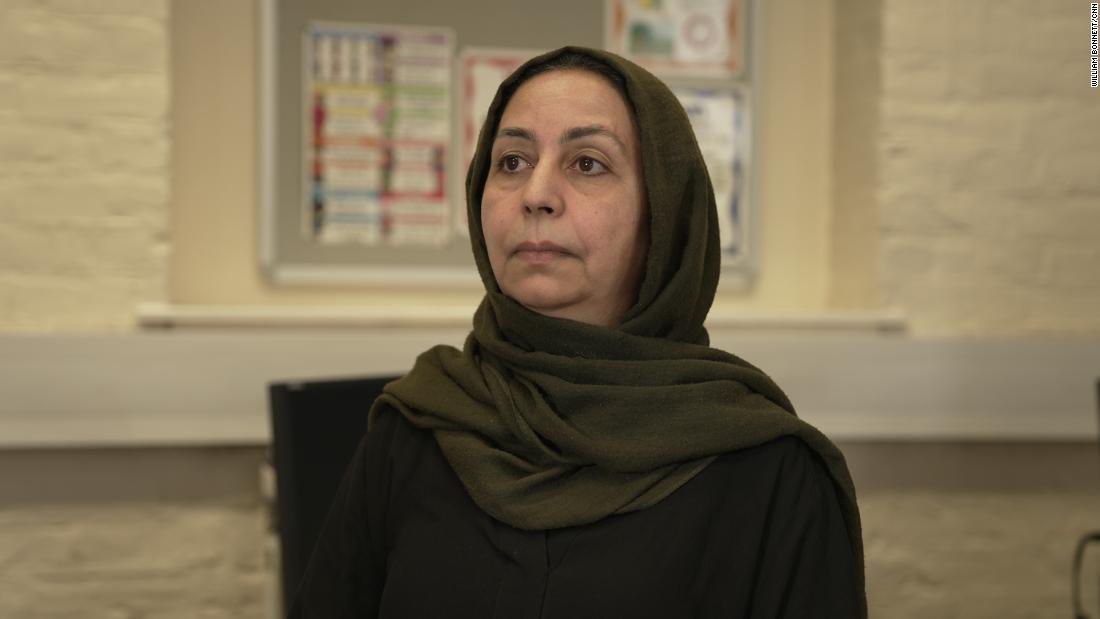 Last August, as the Taliban stormed Kabul and took control of Afghanistan, they shuttered the Elimination of Violence Against Women Court that Amini headed, fired all its judges and, she said, froze their bank accounts. At the same time, the group took control of key prisons and released thousands of inmates, including some of the men she had sentenced in her courtroom, she says.

Amini said she felt afraid and started to seek asylum for herself and her family to escape Kabul.

“We worried about everything — our situation, our lives, and our security especially,” she told CNN in an interview from west London, where she now lives in temporary accommodation with her husband and four daughters.

Before they fled their home, Amini grabbed a pair of scissors, needle and thread. She cut slits into the lining of her dress and stitched inside her most prized possession: her law degree.

Wherever she ended up, the 48-year-old Afghan judge wanted to make sure she carried with her proof of her qualifications.

The same documents mean nothing now for her colleagues stuck in Afghanistan, some of whom have gone into hiding. Amina’s friend, Samira, who served on the same court prosecuting violence against women, said she is among about 80 female judges still remaining in the country.

“Now I live like a prisoner,” Samira, whose full name has been withheld to protect her safety, told CNN in a Skype interview. “They (the Taliban) stole my life.”

The crisis now facing female judges is emblematic of the Taliban’s wholesale dismantling of women’s rights won over the last two decades in Afghanistan.

Since 2001, when the group was last in power, the international community pushed for legal protections for Afghan women and trained a cadre of young female judges, prosecutors and lawyers to uphold them. In 2009, then-President Hamid Karzai decreed the Elimination of Violence against Women (EVAW) law, making acts of abuse toward women criminal offenses, including rape, forced marriage, and prohibiting a woman or girl from going to school or work.

Specialized courts to try cases of the law’s violation — like the one where Amina and Samira worked — were rolled out in 2018 and set up in at least 15 provinces across the country, according to Human Rights Watch. While full implementation was spotty and achievements fell short of what was hoped, the law became a driver for slow but genuine change for Afghan women’s freedoms — change that has swiftly been eroded.
Over the past year, the Taliban’s leaders have banned girls from high school and blocked women from most workplaces. They’ve stopped women from taking long-distance road trips on their own, requiring that a male relative accompany them for any distance beyond 45 miles.
New guidelines to broadcasters prohibit all dramas, soap operas and entertainment shows from featuring women, and female news presenters have been ordered to wear headscarves on screen. And, in their latest decree, the Taliban ordered women to cover their faces in public, ideally by wearing a burqa.

And by banishing women from the judiciary, the Taliban have effectively denied them the right to legal recourse to remedy any of these infringements. It has left women and girls with nowhere to turn in a system that enshrines a hardline Islamic interpretation of patriarchal rule, Amini explained.

It was that terrifying reality, she says, which forced her to flee. Amini, her husband and daughters took a bus in September from Kabul to the northern Afghan city of Mazar-i-Sharif, driving 12 hours overnight with the headlights switched off to avoid detection.

“It was very hard for us,” she said, tears filling her eyes. “During that time, we were very worried about everything.”

From Mazar-i-Sharif International Airport, they boarded a plane chartered specifically for female judges, organized with help from Baroness Helena Kennedy, one of Britain’s most distinguished lawyers.

Last August, Kennedy, a member of the House of Lords, said she was flooded with WhatsApp messages from dozens of desperate judges, women she had developed a connection with through her work setting up a bar association in Afghanistan.

“It started with receiving really tragic and, and passionate messages on my iPhone,” she said. “Messages from people saying, ‘Please, please help me. I’m hiding in my basement. Already, I’ve received messages of threat. Already, there is a target on my back.'”

Determined to help, Kennedy, along with the International Bar Association’s Human Rights Institute, raised money for evacuations via a GoFundMe page and charitable donations from philanthropists. Over the course of several weeks, Kennedy says, the team chartered three separate planes that got 103 women, most of them judges, and their families out of Afghanistan.

The women are now scattered across several Western countries, many still stuck in legal limbo and seeking more permanent residency for themselves and their families.

When Amini’s family left Afghanistan, she says they first traveled to Georgia, and then Greece, where they waited for more than a month before they received documents from the United Kingdom to apply for resettlement. They were finally allowed to travel to the UK. But, a year later, they’re still living in a west London hotel, awaiting more permanent accommodation.

The British government has been criticized for failing to transition some 10,000 Afghan refugees still living in hotels, like Amini, into permanent housing.

“I had imagined that the world would have opened its arms and said ‘bring me these incredibly courageous women.’ But then my second set of problems arose because we had great difficulty finding places to resettle the women,” said Kennedy.

Amini and Samira were once among the trailblazers of Afghanistan, leading women’s rights judges trying to create a fairer, more equal society. Now, they’re living worlds apart, their hopes for their country shattered.

Her priority has turned now to learning English. She hopes to one day resume her work in the UK. Her daughters are enrolled in local schools and continuing their studies — a right they would be denied in their native Afghanistan.

For Samira, there appears to be no immediate way out of Kabul, at least for now. She fears for her young daughter and what growing up under the Taliban will mean for her.

“I think of her future. How can I rescue her? Because life now in Afghanistan is so difficult and dangerous,” Samira said. “We are facing a slow death.”