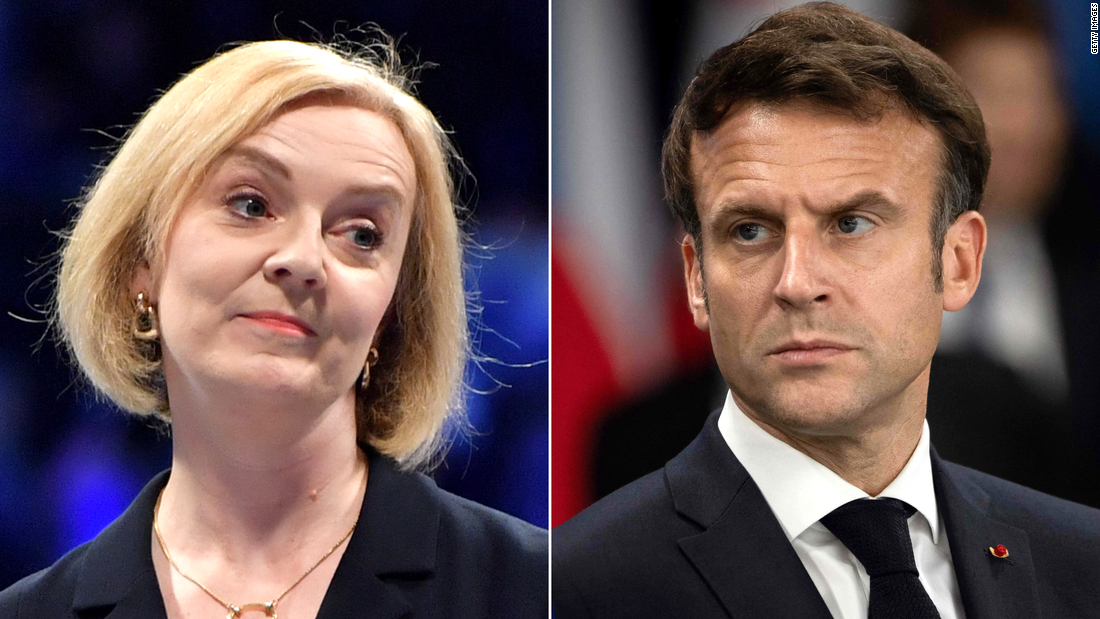 While Russia is launching accelerating salvos at neighboring Ukraine, even threatening nuclear Armageddon, it seems the UK and France — both NATO members — have somehow still not managed to patch things up.
UK Foreign Secretary Liz Truss, who is in the middle of a bitter intra-party battle against Rishi Sunak for leadership of the ruling Conservative party, was recently asked whether French President Emmanuel Macron is “friend or foe?” Her response, offered to applause from her clearly partisan audience, was simple and direct. “The jury’s out.” Then she continued, in a hardly more conciliatory fashion, “But if I become Prime Minister, I’ll judge him on deeds not words.”
These remarks reached Macron when he was on a delicate fence-mending visit of his own to Algeria, the former French colony across the Mediterranean. The relationship between France and Algeria has been especially prickly since Macron’s comments last year accusing the Algerian government of “exploiting memory” of the colonial past and “rewriting of history” based on “hatred of France.” For his own efforts, Macron has taken along a 90-person delegation — including his ministers of finance, interior, defense and foreign affairs.
So, Macron didn’t seem to have much patience for the other swirling rhetorical storm that Truss seemed to be conjuring. If the two countries “cannot say whether they are friends or enemies — and that is not a neutral term — then we are headed for serious problems,” the French President said. “The British people, the United Kingdom, is a friendly, strong and allied nation, regardless of its leaders, and sometimes in spite of its leaders or the little mistakes they may make in grandstanding,” he told reporters.
Of course, Johnson could hardly pass up a good opportunity to insert himself into the tempest, with or without a teapot. In an apparent effort to ease tensions, he said Macron was “a great fan of our country,” or to make sure he was not misunderstood across the Channel, “un très bon ‘buddy’ de notre pays.” Elaborating, he saw relations between the UK and France “of huge importance … They have been very good for a long time, ever since the Napoleonic era basically, and I think we should celebrate that.”

This is a particularly inauspicious moment for such tension to build between two anchor nations of the NATO alliance — especially when they are on the same side of the biggest war in Europe since World War II. While both countries, along with the rest of the continent, the United States and a host of other democratically inclined nations, are facing down Russia and its escalating threats, the UK and France should perhaps find some way to get along — at least with a veneer of amicability.

Dominic Cummings, Johnson’s former adviser, has dubbed Truss, not without some considerable evidence, “the human hand grenade.” The problem is that, lately, there have been voluble grenades lobbed in both directions across a body of water that the British persist in calling “the English Channel” and the French simply “La Manche” — translated literally as “The Sleeve,” or, if pressed, “The Channel.”
This week, French members of the European Parliament petitioned the European Commission to take legal action against Britain for “dirtying” the Channel and the adjacent North Sea with sewage. This stemmed from pollution warnings that British officials had themselves issued for dozens of beaches in England and Wales, as water firms began discharging raw sewage after a string of heavy rainfalls.
“We cannot put up with the environment, the economic activities of our trawlermen and citizens’ health being seriously endangered by the repeated negligence of the UK in wastewater management,” fumed Stéphanie Yon-Courtin, one of the MEPs who signed a letter calling for legal action. “The English Channel and the North Sea are not dumping grounds.” Steve Double, Britain’s water minister, branded the French comments “unhelpful and ill-informed.”
The Times, in its initial reporting on the matter, did not attribute blame in this matter to Brexit. (The UK’s exit agreement could be invoked if it were found to be fouling these waters.) “Britain’s beaches ranked badly even before it left the EU,” the paper’s Paris correspondent Adam Sage admitted.
There is, of course, a long history between these two countries that share such a strategic waterway — back to the time in 1066 when William the Conqueror, Duke of Normandy, crossed the Channel, defeated the Anglo-Saxons at the Battle of Hastings and claimed the throne of England.
Since 1805, the two countries have more or less managed to keep matters on an even keel — at least until the UK opted for Brexit, withdrawing from the European Union — which the French had been instrumental in building and which Macron served as president of on a rotating basis this year. What’s followed have been a succession of contretemps. Matters nearly came to blows four years ago when fishing trawlers of both countries claimed valuable scallop fishing waters.

Now the critical question is whether matters can be restored to pre-Brexit levels — and whether Truss even wants that to happen. She should, for the sake of the UK, the Atlantic Alliance and certainly Ukraine’s war against Russia. There is no more vital a moment than now for a truly united front.