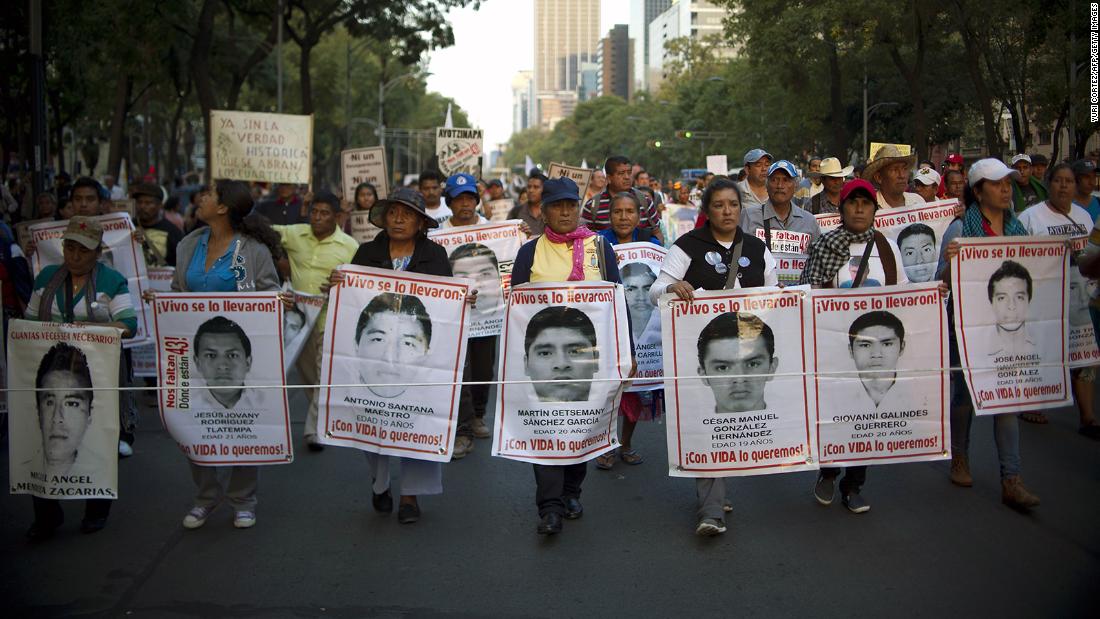 The orders were issued against “20 military commanders and troop personnel from battalions 27 and 41 in the city of Iguala, as well as five administrative and judicial authorities from the state of Guerrero; 26 police officers from Huitzuco; six from Iguala and one from Cocula; plus 11 state police from Guerrero and 14 members of the Guerreros Unidos criminal group,” the statement said.

The group is accused of “organized crime, forced disappearance, torture, homicide and crimes against the administration of justice,” the prosecutor’s office said.

The prosecutor’s office did not identify those allegedly involved and only added that both the arrests and the accusations in each case “will be disclosed in the corresponding criminal process.”

As of Saturday afternoon, the institutions had not made a public statement on the arrest warrants. CNN asked them for comments, and they have not responded.

The students had been visiting the southwestern city of Iguala from a teacher’s college in Ayotzinapa when their buses were intercepted by local police and the federal military forces in September 2014. Exactly what happened after remains unknown, since most of the missing students were never found. But bullet-riddled buses were later seen in the city’s streets with shattered windows and blood.

Survivors from the original group of 100 said their buses had been stopped by armed police officers and soldiers who suddenly opened fire. The case ignited international outrage.

The prosecutor’s office said it considers him a suspect of “the crimes of forced disappearance, torture and against the administration of justice, in the ‘Ayotzinapa’ case.”

CNN does not know if Murillo Karam has legal representation or how he declares himself before the accusations.

The former attorney general’s arrest and the issuance of the arrest warrants took place a day after a government truth commission presented a report concluding the disappearance of the students was a “crime of the state,” in which members of “the Guerreros Unidos criminal group and agents from various institutions of the Mexican state” participated, Mexico’s Undersecretary for Human Rights, Population and Migration Alejandro Encinas said.

Mexican President Andrés Manuel López Obrador said on Friday that the government will continue to work to capture those involved in the crime and find out what exactly happened to the missing students.