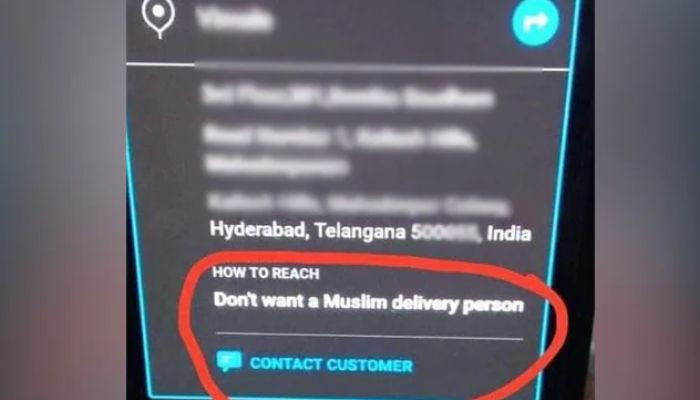 Social media users are calling out a customer’s bigotry who asked the restaurant to not send a Muslim delivery person.

The customer had added the request in the instruction section while ordering food on an app-based delivery platform Swiggy.

The head of an organisation of workers, Shaik Salauddin published the screenshot of the order request on Twitter and urged Swiggy to take an action. Salauddin said that they wanted to deliver food to “one and all” regardless of their religion.

“Dear @Swiggy please take a stand against such a bigoted request,” he tweeted.

“We (Delivery workers) are here to deliver food to one and all, be it Hindu, Muslim, Christian, Sikh.”

While the app has not responded yet, many on Twitter have expressed outrage at the discrimination.

A Congress MP from Karnataka voiced himself on the microblogging platform saying, “Platform companies cannot sit back and watch as gig workers face such blatant bigotry in the name of religion.”

Senior editor at News18, Pallavi Goswami said: “This man must be black listed – no one should deliver here.”

“Name and shame him/her. If they’re so shameless and make this request, then there is no harm in naming them,” said a user.

NDTV reported that the incident was not new. In 2019, another app-based food delivery service Zomato received a similar request. Zomato was praised for the step it took against the man who cancelled the order because the delivery person belonged to a different religion.