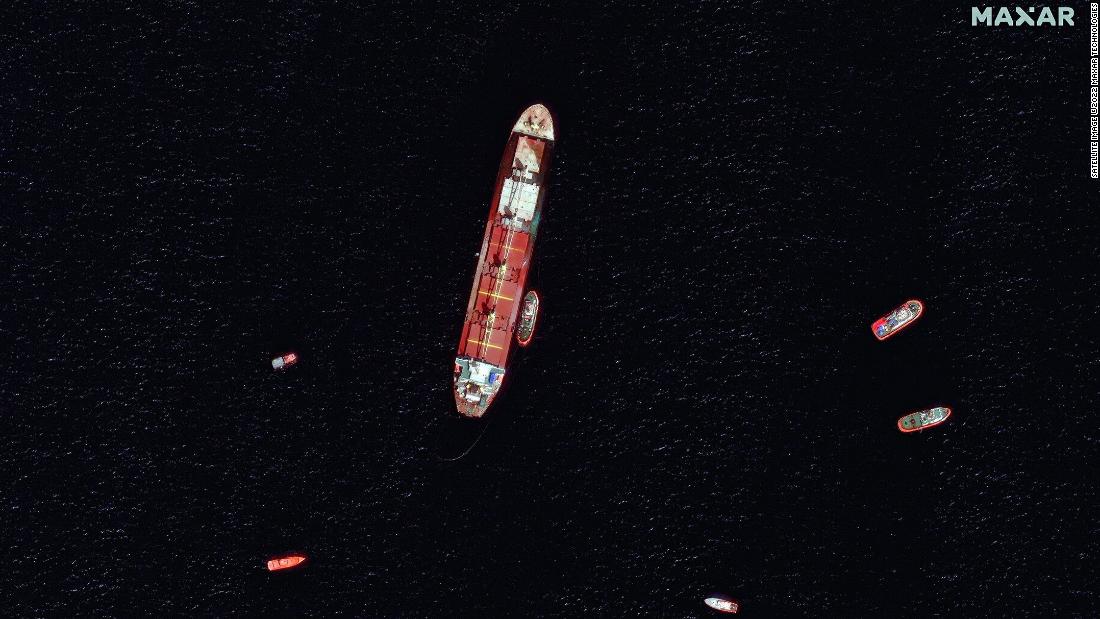 A “major incident” was declared in Gibraltar on Wednesday after the OS 35 cargo ship collided with a liquefied natural gas carrier the day before, according to the government.

The cargo ship, which is carrying 215 tonnes of heavy fuel oil, 250 tonnes of diesel fuel and 27 tonnes of lube oil, was beached to prevent it from sinking in the bay of Gibraltar. All 30 people on board, including 24 crew members and 6 surveyors, were evacuated.

The Gibraltar Port Authority (GPA) confirmed Thursday that there had been a leak of oil, a small amount of which escaped the perimeter of a boom set up in the wake of the accident.

“The salvage team onboard have identified the source of this leak to two tank vents from the vessel’s bunker tanks. All vents had previously been sealed, but the seal of two vents became loose on the crumpling of the vessel,” the GPA said in a statement.

The statement said divers on scene have been able to re-establish the seals and the GPA was in the process of stopping the release of oil from the vents. Authorities were collecting the free floating oil that has already vented, while sorbent booms to absorb the oil were being deployed.

On Wednesday night, the government said there were indications that the cargo ship had “not broken apart as such, but has crumpled,” and that the “first concern” was the offloading of the low sulfur heavy fuel oil onboard as soon as possible, followed by diesel and lube oil.

The government added that there “has been no way to remove the fuels in question from the vessel any sooner in a manner that was not a risk to the environment.”

Greenpeace told CNN it is worried as the area of the incident is a heavily polluted area due to the volume of ships passing by.

Greenpeace campaigner Francisco del Pozo, who is monitoring the situation, told CNN that “as it is, there is no major oil spillage.”

According to the Gibraltar authorities, it will take around 50 hours of pumping with the operation carried out “under the strictest supervision to seek to avoid any spillage.”

Additional oil spill equipment is expected to arrive in Gibraltar from the UK on Sunday, the statement said.

Gibraltar’s government said the timeframe for salvaging the hull of the OS 35 cargo ship is likely to extend longer than the previous expectation of a few weeks.