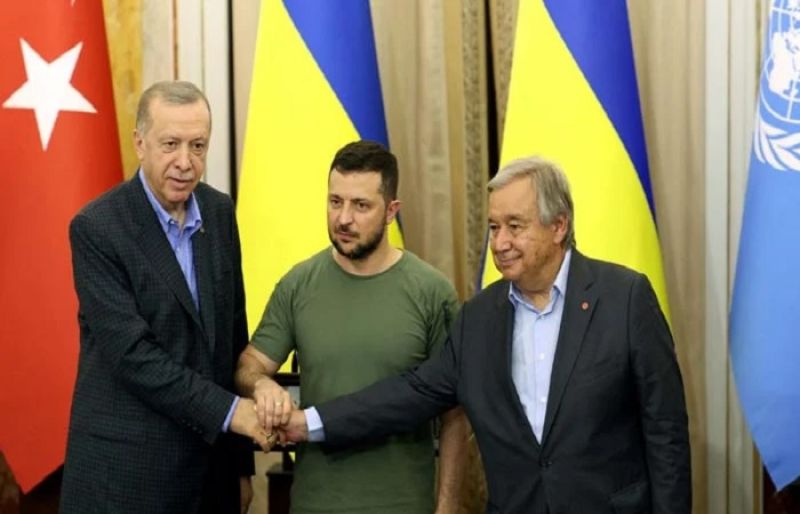 A flare-up in fighting around Europe’s largest nuclear facility in Russian-controlled southern Ukraine has sparked urgent warnings from world leaders and UN chief Antonio Guterres cautioned during talks with Erdogan that any damage to the plant would be akin to “suicide”.

“We are worried. We don’t want another Chernobyl,” Erdogan said during a press conference in the eastern city of Lviv, during which he also assured the Ukrainian leader that Ankara was a firm ally.

“While continuing our efforts to find a solution, we remain on the side of our Ukraine friends,” Erdogan said.

Guterres said he was “gravely concerned” about the situation at the plant and said it had to be demilitarised, adding: “We must tell it like it is — any potential damage to Zaporizhzhia is suicide”.

Erdogan, who has major geopolitical rivalries with the Kremlin but maintains a close working relationship with President Vladimir Putin, met with the Russian leader less than two weeks ago in the Black Sea resort of Sochi.

The Turkish leader along with Guterres were key brokers of a deal inked in Istanbul last month allowing the resumption of grain exports from Ukraine after Russia’s invasion blocked essential global supplies.

Ahead of the press conference with Zelensky, Ukraine’s port authority announced that the 25th cargo ship under the deal had departed for Egypt carrying 33,000 tonnes of grain.

Guterres said during the meeting with reporters that the sides hoped to intensify efforts to bolster operations at three southern ports designated for exports under the deal.

“We will do our best to scale up our operations to face… the coming winter,” the UN chief said, hailing the deal that saw a safe corridor established for cargo ships to exit Black Sea ports.

The success of the grain deal contrasts with failed peace talks early in the war and Zelensky on Thursday ruled out peace with Russia unless it withdraws its troops from Ukraine.

He told reporters he was “very surprised” to hear from President Recep Tayyip Erdogan that Russia was “ready for some kind of peace”, adding: “First they should leave our territory and then we’ll see”.

Fighting raged along the front on Thursday.

The early morning bombardments across the city of Kharkiv and nearby Krasnograd left at least six dead and 25 injured, just one day after Russian bombardments killed 13 in the country’s second-largest urban centre.

The regional governor Oleg Synegubov posted images from the scene of one Kharkiv strike showing the smouldering remains of several burnt-out buildings and twisted wreckage of destroyed vehicles nearby.

But fighting in recent weeks has focused around the southern region of Zaporizhzhia and the nuclear facility there, and Zelensky has called on the UN to ensure security at the plant after direct talks with Guterres in Lviv.

“The UN must ensure the security of this strategic object, its demilitarisation and complete liberation from Russian troops,” he said, blaming Russia for “deliberate” attacks on the facility.

Russian forces took the Zaporizhzhia plant in southern Ukraine in March and uncertainty surrounding it has fuelled fears of a nuclear incident, recalling the Chernobyl disaster in 1986.

Moscow meanwhile dismissed Ukrainian allegations Thursday saying its forces had not deployed heavy weapons at Zaporizhzhia and accused Kyiv of preparing a “provocation” there.

“Russian troops have no heavy weapons either on the territory of the station or in areas around it. There are only guard units,” the ministry said in a statement.

NATO Secretary General Jens Stoltenberg said Russia’s seizure of the plant “poses a serious threat” and also called for a Russian withdrawal and inspections by the IAEA.

The UN chief is due to travel on Friday to Odessa, one of three ports involved in the grain exports deal.

He will then head to Turkey to visit the Joint Coordination Centre, the body tasked with overseeing the accord.