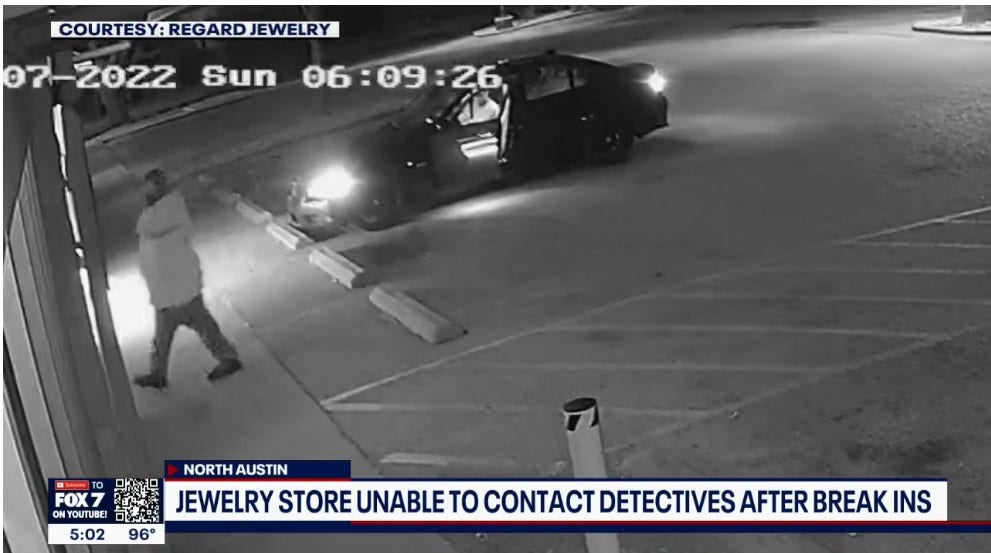 Four Texas jewelry store owners suspect they are being targeted by same thief, and none of them have received assistance from the Austin Police Department.

The owners shared their frustration with the Austin Police Department with Fox 7.

“I mean, people rely on us to keep their stuff safe. And when you have somebody break in, and makes us kind of look bad, and even though we’re not completely covered on everything, but, you know, the customer sees that, and they’ll be like, ‘well, I’m not taking my stuff there,'” local watchmaker Aaron Jamison said.

In a surveillance video, the thief is seen at the Austin jewelry store.
(Fox 7)

Daniel Schwieterman, another jewelry store owner, said that he was alerted to a break-in around 7 a.m. on Sunday.

“A gentleman pulled up in the parking lot in his BMW, got out with tools, walked past our front door, went to a window that was sealed real quick with a screwdriver, pulled the seal out, busted the window and tried to break into the bars,” Schwieterman told Fox 7.

When the thief wasn’t successful, he went next door to a dentist’s office where he had better luck.

After contacting a local jeweler’s committee, Schwieterman learned that his experience wasn’t unique. Three other Austin jewelry stores had been broken into in the past month.

Surveillance footage provided by Regard Jewelry shows a thief attempting to break in.
(Fox 7 )

He learned that the thief left similar clues at the three other shops like leaving behind a receipt with a name on it for tools he used for one of these break-ins at a shop.

“I mean, it’s super frustrating. We’ve tried telling them, one what the gentleman’s name is. And I have video of him with the mask on and without it, we have it at three other stores with his mask on and with the receipt now and nothing,” Schwieterman said.

Schwieterman said he has been unable to get in contact with a detective.

“That’s rough. You know, when the city you grew up in, and love kind of turned your back on you?” Jamison said.

The thefts haven’t been assigned a case number and Schwieterman said that the shop owners haven’t been able to make an insurance claim for the damage.

Sarah Rumpf is a Fox News Digital Production Assistant. You can reach her on Twitter at @rumpfsarahc