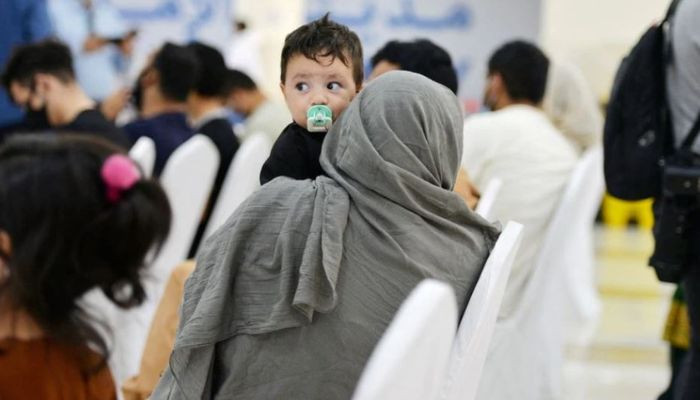 Afghan refugees and migrants living in limbo at a United Arab Emirates (UAE) facility for nearly a year since being evacuated from Afghanistan held protests this week over what they say is a slow and opaque resettlement process.

Hundreds of Afghans carried banners and shouted for freedom on Monday and Tuesday, two Afghans in the facility told Reuters, estimating that thousands were awaiting resettlement to the United States or other countries.

Pictures and videos shared with Reuters showed children, women and men protesting inside the facility in Abu Dhabi, known as Emirates Humanitarian City, with temperatures in the Gulf Arab state reaching 38 Celsius (100 Fahrenheit).

One boy held a small banner that read: “One year is enough!”

Men and children chanting “we want justice” were seen in one video wearing white blindfolds inscribed with the word “freedom”. The men and some children had bound their wrists, in an apparent gesture to what some Afghans said are prison-like conditions in the facility.

The UAE says it is committed to ensuring Afghan evacuees can live in safety, security, and dignity.

“Nearly one year, we have been here in detention and the camp is like a modern prison. No one is allowed to go out, they don’t know when (we) will be settled permanently to any country,” said one Afghan who declined to be identified.

A UAE official acknowledged there were frustrations and said that Abu Dhabi was working with the US Embassy to resettle the Afghans in the United States or elsewhere.

A State Department spokesperson said Washington was working to identify Afghans who may qualify for resettlement in the United States and “will be relentless in this effort” while “ensuring standard screening and vetting measures”.

More than 10,000 Afghans had been relocated from the Abu Dhabi facility to the United States and Washington was cooperating with the UAE and other countries to find “resettlement options” for those ineligible for US relocation, the spokesperson said.

Protests erupted at the facility in February after the resettlement process appeared to have stalled, prompting a visit by a US State Department official who said all Afghans there would be resettled by August.

The process resumed shortly after the visit. At the time, there were an estimated 12,000 Afghans at the facility in Abu Dhabi and another site nearby.

Since then, the United States has taken in more than 85,000 Afghans, many processed in the Middle East and Europe.

The two Afghans who spoke to Reuters said the mental health of those in the tightly controlled facility was deteriorating due to the uncertainty. Both said they did not know when they would be resettled.

#AfghanEvac, a coalition of volunteer groups advocating on behalf of Afghans to the US government, wrote on Twitter after protests broke out that the process had not stalled and those in the UAE facility would be resettled in the United States or elsewhere.

Officials in the UAE said it offered to temporarily host thousands of Afghans evacuated on behalf of the United States and other Western nations after Afghanistan’s Western-backed government collapsed and the Taliban took over.

Some of those at the Abu Dhabi facility arrived on military flights from Kabul as US forces withdrew. Others came later on chartered flights.

US officials say the cases of many of those evacuated both before and after the withdrawal are complicated.

Some do not have any identity documents and need to go through a vetting process before they can be resettled, while some have no ties to the United States or any other country that would qualify them for resettlement.

The UAE, like other Gulf states, typically does not accept refugees.

US officials have said no one would be forced to return to Afghanistan, though some Afghans in the UAE returned voluntarily after months of waiting.

Among Afghans who have been held in the UAE, advocates say, are those who worked with the US government, military, other coalition partners and foreign aid groups during the war.