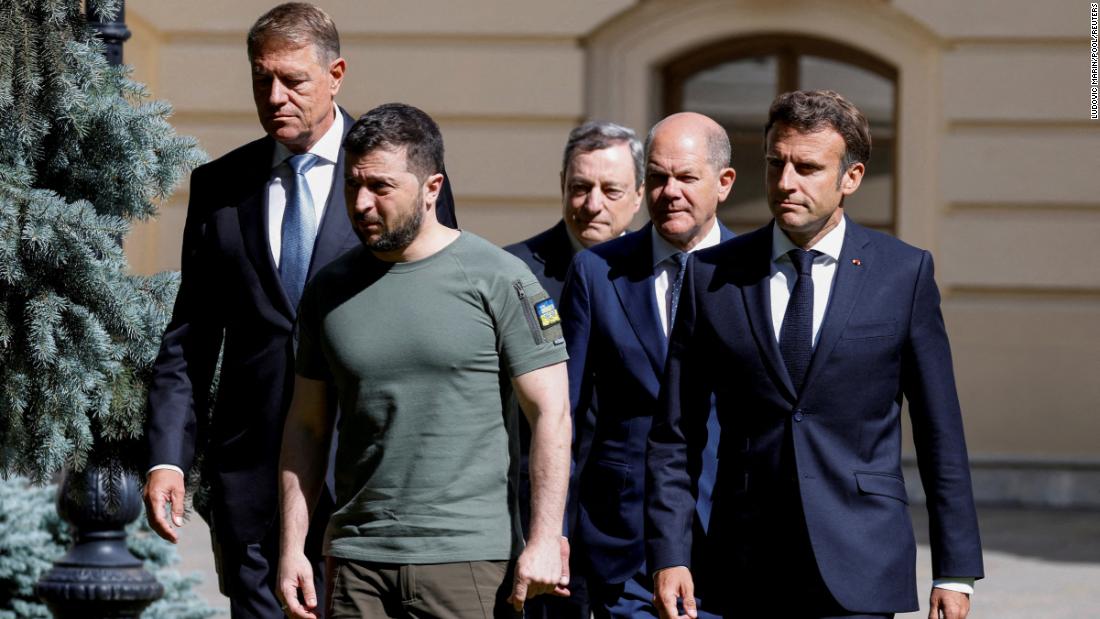 Despite years of fractured relations during the era of former US president Donald Trump and the Covid-19 pandemic, the trans-Atlantic alliance has managed to pull together and reach agreements on financial support and the donation of weapons to Kyiv, agreements to stop using Russian energy as well as sanctions designed to hit President Vladimir Putin and his cronies.

However, as the crisis reaches its half-year anniversary, officials across Europe are worried that the consensus could fall apart as the continent enters a bleak winter of rising food prices, limited energy to heat homes and the real possibility of recession.

Western officials and diplomats spoke to CNN on the condition of anonymity to candidly describe sensitive conservations among governments.

In a possible taste of more draconian measures to come, German capital Berlin turned off the lights illuminating monuments in order to save electricity, while French shops have been told to keep their doors shut while the air conditioning is on, or else face a fine.

Ukrainian President Volodymyr Zelensky, who has captured the West’s imagination and put heat on countries to support his war effort, might find it harder to get the attention of his fellow European leaders as the conflict drags on.

“The challenge for Ukraine is the same as it was on day one: keeping the West on side as the costs of supporting Kyiv hit home — not just Putin’s gas and grain blackmail but also the cost of economic and humanitarian support,” says Keir Giles, a senior consulting fellow at think tank Chatham House.

“That may well be why Zelensky said he wanted the war over before Christmas, because the real issues will be getting the West to stick to its promises in the long run.”

The winter fuel crisis is something that European officials and diplomats are thinking about daily, with Russia accounting for about 55% of Europe’s total gas imports in 2021.

European countries also have a thirst for Russian oil, with almost half of Russian oil exports going to the continent. The EU reportedly imported 2.2 million barrels of crude oil per day in 2021.

“Within the European Union, it will be very difficult and we must try to stick to our promise to cut off Russia when it comes to any profits from gas and other sources,” says a senior European diplomat, referring to a deal struck between the EU member states to cut their use of Russian gas by 15%.

However, the agreement has been criticized for being voluntary, and officials fear that when push comes to shove, some EU countries simply won’t play their part.

“There is the blob of Western Europe that is protected by distance and could not be convinced that becoming dependent on Russian energy was a catastrophic self-inflicted vulnerability, and even now hopes for a return to ‘normality’ with Russia,” says Giles.

Officials also fear that the Western strategy of arming the Ukrainians is becoming a short-term solution to a long-term problem: a war with no clear end point.

French weapons are currently on the battlefield in Ukraine, while Germany broke decades of pacifist policies to both increase its own defense spending and send weapons, though it was criticized for the delivery of those weapons taking longer than needed.

“At the start, the Western response was harder than Russia expected. Tactically the Kremlin got a lot wrong. It was politically quite easy to rally behind Ukraine and make the case for donating weapons and cash,” a NATO official tells CNN.

“Over time, the types of weapons we are sending have got more complicated, as has the training required to use them effectively. The good news is, these arms are helping the Ukrainians hold out. The bad news is, the longer the war goes on, the shorter on supply these weapons will be, making them harder to give up,” the official adds.

On top of the economic and military costs affecting the generosity of the West, there is also serious concern that the world starts to experience war fatigue as the conflict stagnates.

“Back in February, it was easy to jump on the anti-Putin bandwagon. Now the war is in the boring strategic stage. There are fewer daily gains and losses and there are fewer photo opportunities,” says a NATO diplomat.

Of course, this won’t be as straightforward as countries simply withdrawing their support. But it might involve countries changing the parameters of exactly what outcome they support.

Some Western European countries, most notably Germany and France, have said publicly that dialogue will have to exist between the West and Moscow. French President Emmanuel Macron has repeatedly said that he believes at some point negotiations will need to take place between Russia and Ukraine, while Germany Chancellor Olaf Scholz has come under fire for mixed messaging on Russian gas and most recently on whether or not Europe should ban Russians from obtaining travel visas.

“Do we all still have the same view of the end game? Is it just getting back to the borders of before Russia invaded? Or is it back to pre-2014, before Russia annexed Crimea? And will we deal with Putin after the war or will he need to stand down,” says a European diplomat. “These are the long-term questions we need to be asking, but are not. It’s better not to ask these questions right now.”

The next few months will be the hardest for European nations since the war began. Citizens will feel the cost-of-living crunch across the continent. Some will have to make choices between heating their homes and eating. This crunch comes as many European countries have already played host to thousands of Ukrainian refugees. Against this backdrop, it is hard for political leaders to justify spending money and energy supporting a country far away, especially when some of their citizens may feel that they’ve been generous enough as it is.

Multiple Western officials told CNN of their concern that at some point, political leaders might decide the best thing is to broker for a peace deal and undercut the Ukrainian preferred end game, which is forcing Russian forces back to the previous borders.

“There is growing concern in some quarters that if Ukraine appears to be losing ground to Russia this may accelerate calls for a negotiated settlement. Zelensky must continue to work his PR magic and promote the message that Ukraine is still making progress, fighting hard and needs weapons,” Theresa Fallon, director at the Centre for Russia Europe Asia Studies, tells CNN.

“As soon as people sense that [Kyiv] is on the losing side they may start to ask why do we continue to supply costly weapons to Ukraine at a time of economic stress. Why are we throwing good money after bad,” she says.

This will be critical, she points out, as many key allies also go through turbulent political periods at home. Italy will hold an election, the United Kingdom will have a new prime minister and the United States will hold mid-term elections that may determine the rest of President Joe Biden‘s first term in office.

“As domestic political issues start to dominate, citizens might ask why are we helping Ukraine instead of building infrastructure,” Fallon adds.

For all that the West can reasonably pat itself on the back for its initial response to the crisis, things are about to get a hell of a lot harder. Most officials acknowledge that no one has a clue on how this conflict ends. And while most would like to see Ukraine achieve its goals of standing up to Putin and forcing him out of their country, their true resolve has yet to be fully tested.

And the miserable truth is that should the time come, a negotiated peace involving Putin might not feel as much of a worry to countries that don’t share a frontier with Russia and, bluntly, don’t see Moscow as the sole cause of such an existential crisis.