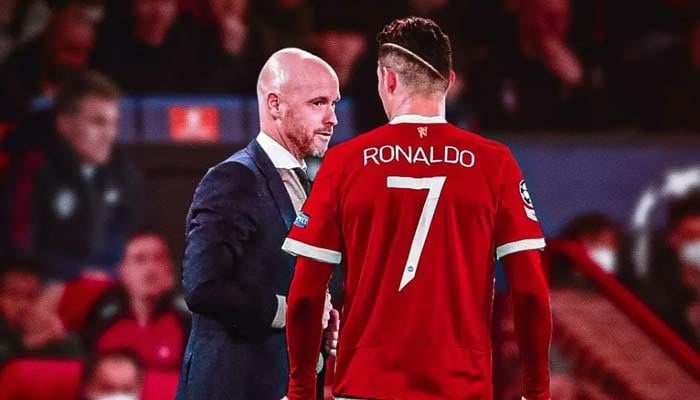 LONDON: Manchester United manager Erik ten Hag repeated on Wednesday that he was counting on Cristiano Ronaldo this season.

“It’s clear, of course, we need quality players,” Ten Hag told a press conference when asked about his unsettled Portuguese star on the day before the transfer window closes.

“You need more and to cover all the games to keep the consistency going, that’s what we strive for.

“From now on, we go in three games a week.

“We will go from September to minimum January with this squad.”

Ronaldo has been pushing for a transfer since the end of last season when United failed to qualify for the Champions League.

The 37-year-old Portugal striker is the all-time top scorer in the competition, 15 ahead of Lionel Messi, but the Argentine is more than two years younger and will be playing in the Champions League this season with Paris Saint-Germain.

Ronaldo has found it impossible to attract offers from Europe’s top clubs, with the latest reports linking him with the likes of his former team Sporting Lisbon, as well as Napoli and Marseille.

Ronaldo has only started one of United’s four league games this season, the humiliating 4-0 loss at Brentford.

Although United said on their website on Tuesday that they had reached a deal to buy Brazilian winger Antony from Ajax, Ten Hag was coy about the player.

“Firstly, I have to sign him! There’s an agreement between the clubs but the paperwork is not done so I cannot go too deep into that,” he said.

Ten Hag also confirmed that he expected Martin Dubravka to join from Newcastle. The goalkeeper has reportedly passed his medical.

Ten Hag said that right-back Aaron Wan-Bissaka would not be leaving and that the Antony and Dubravka deals would complete United’s business in the current window.

“In the offensive department we needed to strengthen the squad. Offensive players fatigue quicker. They have to run more with high intensity,” he said.

“For this window, it will be the end. You always have to be alert at a top club. But we will go from September to minimum January with this squad.”

United started the season with two losses, at home to Brighton and at Brentford, but have gained one-goal victories over Liverpool and at Southampton to climb into mid-table.

United visit Leicester on Thursday and host current league leaders Arsenal on Sunday when Antony may be available.