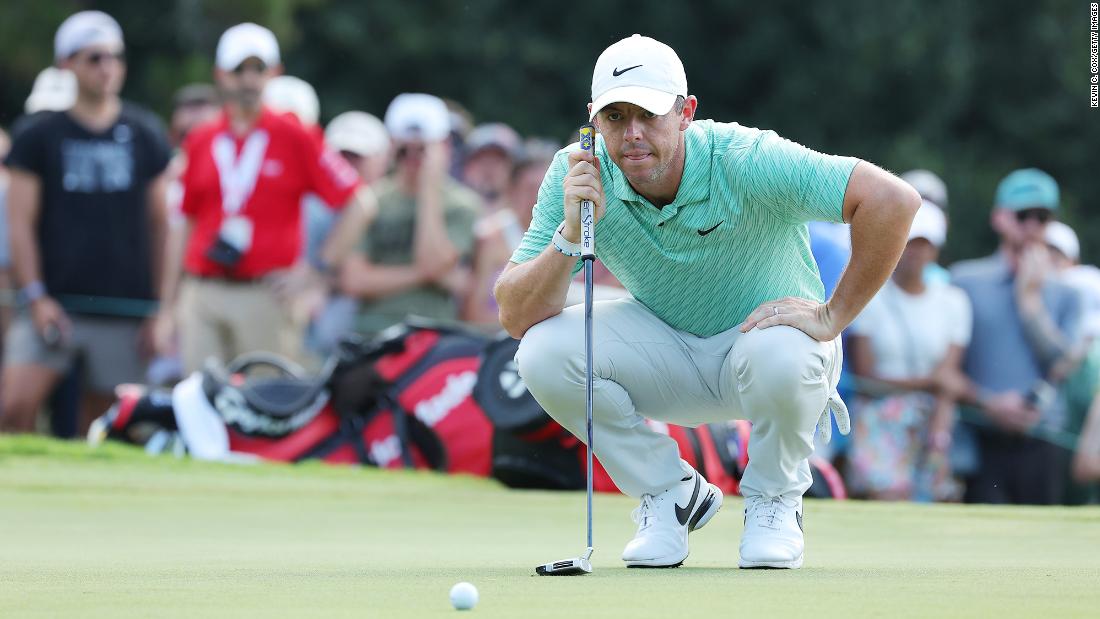 “I think there are ways to mend that and bring it back together. But with everything else that’s going on right now, I don’t see that happening anytime in the future.”

Before the BMW Championship two weeks ago, McIlroy participated in a meeting of top PGA players to discuss the threat of the breakaway LIV Golf series which is funded by Saudi Arabia’s Public Investment Fund (PIF) — a sovereign wealth fund chaired by Mohammed bin Salman, the Crown Prince of Saudi Arabia and the man who a US intelligence report named as responsible for approving the operation that led to the 2018 murder of journalist Jamal Khashoggi. Bin Salman has denied involvement in Khashoggi’s murder.

“Being right in the middle of things has been tough at times and it’s probably taken time away from the two things that are most important to me which are family and golf,” McIlroy admitted of his role as unofficial spokesperson for the PGA Tour players.

“But there’s certain times where things just need to be done and you have to put yourself out there to stand up for what you believe in. And I feel like that’s what I’ve done this year and I’ll continue to keep doing that, but at the same time still try to be the best player in the world.

“So I’m wearing a lot of different hats at the minute, but I feel like I’m able to handle all of it pretty well at the moment.”

Many high-profile players have left the PGA Tour for LIV Golf — including major winners Phil Mickelson, Dustin Johnson and Brooks Koepka — enticed by $250 million in total prize money and an attempt to reform the PGA Tour.

They have faced criticism from fellow players for abandoning golf’s traditions and accepting money from a country which has been widely condemned by human rights groups.

‘A hard one for me to stomach’

In response to the existential threat of LIV Golf, the PGA Tour has suspended anyone who has joined the breakaway series.

On the DP World Tour — formerly the European Tour — however, the initial fine and suspension for three events handed to the LIV Golf players was temporarily blocked by a UK arbiter, and so at next month’s BMW PGA Championship, McIlroy will face off against players who are now a part of LIV Golf.

“It’s a hard one for me to stomach the fact that I go over to play an event and 18 of those guys are going to be playing in the same field,” McIlroy said.

“I don’t like that, that’s not something that I really want to be any part of, but for me, just as committed as I am to the PGA Tour, I want to make that commitment to the DP World Tour as well.”

The eligibility of European LIV Golf players to compete in the Ryder Cup is still the subject of legal disputes while the American LIV Golf players are unlikely to participate as they cannot accumulate the required qualification points from the PGA Tour from which they are suspended.

Since LIV Golf players can currently compete on the DP World Tour, they are able to accumulate the qualification points required to represent Europe at the Ryder Cup, a factor also prompting McIlroy to compete in these upcoming European events.

Asked if the LIV golfers should be allowed to play in the Ryder Cup, McIlroy told CNN, “No, if I had my way, no.

“I want to support [Luke Donald] as a captain. And so, I’m trying to do things all for the right reasons and those 18 guys over there have done things that I don’t agree with. And it’s a shame that it’s come to this point.”