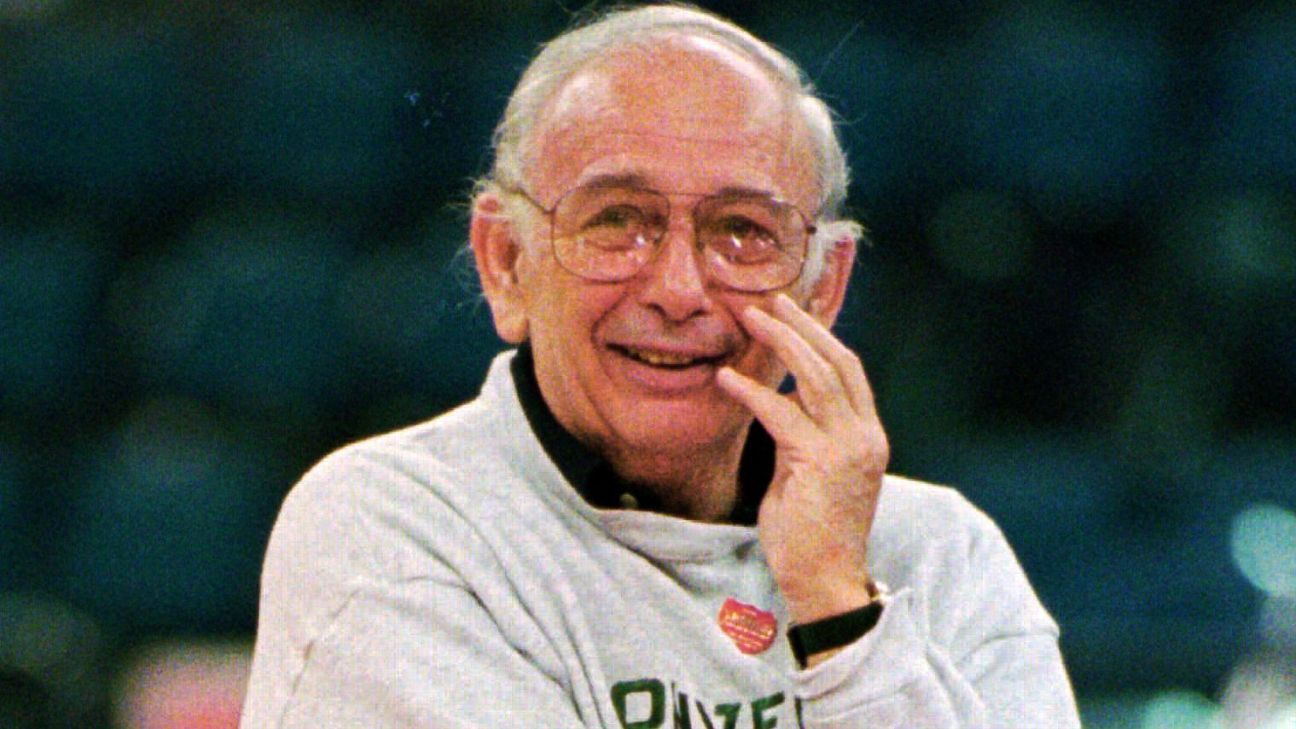 Pete Carril, the Hall of Fame coach who brought notoriety to the “Princeton Offense” during his 30-year tenure with the Tigers, died Monday morning at the age of 92.

“We kindly ask that you please respect our privacy at this time as we process our loss and handle necessary arrangements. More information will be forthcoming in the following days,” the Carril family said in a statement released by Princeton.

Utilizing a deliberate, clock-draining offense that relied on backdoor cuts and precision passing, Carril led Princeton to 13 regular-season Ivy League titles at a time when the conference did not have a postseason tournament. Princeton also won the NIT in 1975, defeating Providence 80-69 at Madison Square Garden.

But it was the Tigers’ memorable March nights in their 11 NCAA tournament berths under Carril that featured the frenzied coach prancing up and down the sideline as Princeton tried to outsmart superior opponents — during upsets and near-upsets on prime-time television — that left an indelible mark on college basketball.

“Anybody can coach basketball. I can tell you that right now. It’s not that hard to know about a pick-and-roll, a back-pick, the shuffle-cut, I mean, it’s not that hard,” Carril said after he retired. “But what is hard is to see how to develop something, to have an idea how your team is going to play. And that comes under the header of thinking.”

That logic was on display in 1989, in Providence, Rhode Island. As a No. 16 seed, Carril’s Tigers took the No. 1 Georgetown Hoyas the distance in a thrilling 50-49 Hoyas victory that captured the tournament’s attention.

In a news conference leading up to the game, the ever-so-realistic Carril, who was never shy about creating a laugh for his audience, said. “I think we’re a billion-to-one to win the whole tournament. To beat Georgetown, we’re only 450 million-to-one.”

ESPN analyst Dick Vitale concurred with his good friend Carril. In a studio segment in Bristol, Connecticut, leading up to the game, Vitale made a promise: “I’ll tell you what, I’m supposed to go home for the weekend. If Princeton can beat Georgetown, I am going to hitchhike to Providence, which isn’t that far from here. I’m gonna be their ball boy on their next game. And then I’m gonna change into a Princeton cheerleading uniform and I’m gonna lead all the cheers.”

As far-fetched as it was, the Tigers actually led at the half 29-21 and used their patient offense to frustrate a star-laden Hoyas team featuring Alonzo Mourning and coached by John Thompson. Despite mismatches at nearly every position — not to mention a Georgetown rebounding advantage of 32-13, led by Mourning’s 13 — the Tigers battled to the end as an anxious Carril huffed and puffed from the bench.

“They kind of lulled us to sleep with the backdoor cuts and running the shot clock down,” Mourning said after the game. “As soon as we slipped up defensively, they took advantage.”

Several more close calls followed in the tournament for the New Jersey school known more for producing Rhodes Scholars and Pulitzer Prize winners than athletes. In 1990, as a No. 13 seed against No. 4 Arkansas, the Razorbacks outlasted Carril’s Tigers 68-64.

Losses to Villanova and Syracuse by a combined 10 points followed the next two seasons as the Tigers continued to dominate the Ivy League only to come up short in the NCAA tournament. But Carril’s program finally broke through with a March Madness game for the ages in 1996.

After winning the Ivy title in a one-game tiebreaker, defeating Penn 63-56 in overtime, Carril told his team he was going to step down after the NCAA tournament. After the victory over the Quakers, in fact, he wrote on a whiteboard in the locker room: “I’m retiring. I’m very happy.”

A week later, facing the defending national champion, UCLA, Princeton, again a No. 13 seed, upset the No. 4 Bruins 43-41 in Indianapolis.

“We just knocked off a giant,” Carril said in the postgame interview, letting out a great laugh.

Former UCLA coach Steve Lavin, who was an assistant on the 1996 staff, agreed. “It was,” he said, “one of the most memorable games in NCAA history.”

Indeed, the push and pull of a nail-biting NCAA tournament game proved to be the perfect stage for a frazzled Carril on the bench, whose white hair stood up in all directions as the Tigers hung on for a classic first-round shocker that truly defines the essence of March Madness.

“I believe that in defining greatness in coaches u must determine if they get maximum out of their TEAM personnel,” Vitale tweeted on Monday. “PETE CARRIL is a prime example of a brilliant coaching mind that got max out of his talent. May Coach RIP !”

“Princeton was always half-decent in basketball. But we’re a national school now, basketball wise. And I don’t think that anything’s going to happen to change that.”

Carril moved on to a career as an assistant coach in the NBA, serving three different stints with the Sacramento Kings before retiring in 2011.