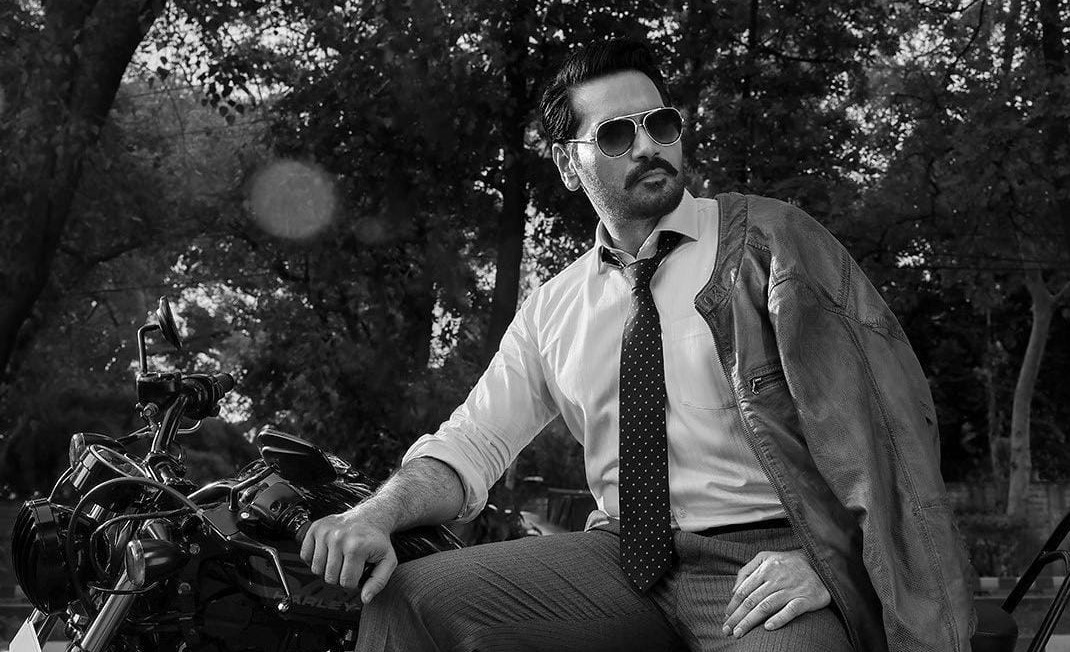 The quintessential Pakistani hero, the man who’s dominated our screens in his hyper-masculine roles, took off his tough-guy mask for a vulnerable tell-all conversation with Frieha Altaf. The first one to be featured on the PR mogul’s new podcast series titled FWhy, Humayun Saeed, the ultimate superstar and filmmaker, spoke about his journey from a factory labourer to starring in Netflix’s hit show The Crown and everything in between.

Born in a Punjabi family, the 51-year-old recalled his childhood in a loud-aggressive and emotional household. What most people don’t know about Humayun is that he was quite the nerd as a kid. “My dad was very aggressive, so I felt the obligation to please him and get his validation in all ways possible. Until matric, my grades were always top-notch. I never scored anything beyond a second or third position.” Revealing that even his extended cousins were scared of his father’s maar (beatings),  the Bin Roye actor shared that he has inherited some of that anger from his father. “I don’t usually get angry but when emotions get the best of me, I throw anything in sight. I’ve gotten better at controlling it though,” he said.

Humayun shared how there was a phase when his life was limited to hospital visits due to his brother’s paralysis. “I was 18 or 19 and there were many responsibilities on me. I started working alongside college, gave tuitions, but that wasn’t enough given the medical bills,” he said, later adding that his father then took him to meet Altaf’s father who is an aeronautical engineer. “I remember walking into the Shahrah-e-Faisal office and telling him that I want to be a steward.”

Fast forward to his first drama, the Punjab Nahi Jaungi actor shared that he actually just threw a party in his manufacturing factory on the day of his salary raise where he had his crew perform skits and songs and dance performances. “Nadeem [Baig] was right there and he said, ‘well you look like a hero, why don’t you try for this two-episode thing for PTV?’ and I didn’t go. I said I have to work but that thing stayed with me. Another friend of mine at my factory walked in with an actor and he offered me another audition, to which I said yes and they selected me as the hero.” And the rest, as we all know, was history. Saeed took over the entertainment industry like a storm and continues to marvel through it.

Speaking about yet another life-changing moment, the actor talked about meeting the love of his life, Samina Saeed. “I had never thought of marriage but then I met Samina. When we were at a phase where I had to make tough decisions, I started crying, thinking about what will happen if she ends up marrying someone else. My parents were also not in favour,  they thought it was not the right age for me but we stood our ground. And it proved to be the right decision. The strong woman that she is, she guided me through life and work,” he exclaimed while sporting a blushing smile on his face.

Humayun also added how his wife was initially insecure about him romancing other women on screen but later became friends with all of them. “In the beginning, she was a little scared, a little conservative. But then Sania (Saeed), Marina (Khan), Mehreen (Syed) and others, she’s still friends with them. She realised they were all nice people. All of her worries went away. She’d bring food to the sets and talk to everyone,” he added.

Bringing back an old gossip that said Saeed was after another woman when his now-wife gave him a deadline to “get his acts straight,” the host asked him if the story had any merits to it. “There wasn’t another girl in a way that I didn’t officially go on dates with her or something. We met once or twice at a wedding or something and we’d talk on calls. I had contacted her to meet and I wanted to tell her about Samina only but Samina found out and gave me an ultimatum. That was it.”

He also added how when he decided to leave the joint family culture after his marriage, his family frowned upon his decision. “I was earning less and I realised we won’t be able to run things and live our life if we have to cater to everyone in the family. We had to separate to maintain our lives. We moved into an apartment because it was necessary,” he said, sharing that nowadays it’s a common practice but back then, parents didn’t appreciate sons leaving the house after marriage.

While the former supermodel tried her best to retain information about Saeed’s Hollywood debut, the actor remained tight-lipped about it. “I haven’t spoken to anyone about it. Nobody knows anything, all gossip around it isn’t true.” Proudly saying that his experience shooting the royal drama was “very good,” he added that the show premieres on November 26th.

Like Altaf, we can’t wait to see Saeed as Dr Hasnat either!