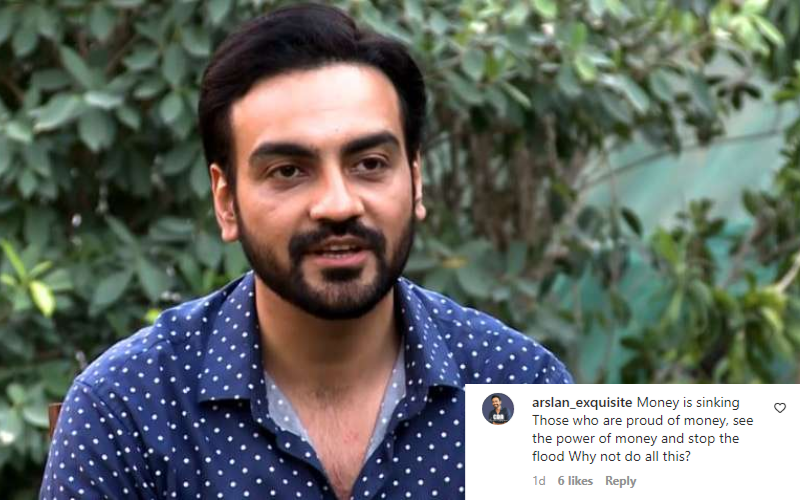 As the number of flood affectees across the provinces of Sindh, Balochistan and Khyber Pakhtunkhwa continues to climb at an unprecedented rate, actor and content creator Arslan Naseer has left a grim message on Instagram for those trying to earn a quick profit under the pretence of helping combat the natural disaster.

Alongside a news update for tent prices facing an appalling hike of up to Rs 15,000 due to an increase in demand in the midst of the national emergency, Arslan places a clip from a previous YouTube video speaking about the country’s condition that still holds true to this day. “Thank you Pakistanis,” the post’s blunt caption says.

“Then they say why do bad times come to us. We are all thieves, I have said the same thing a thousand times before. No politician or government official is stealing from us. The people who complain about the country’s worsening conditions and say ‘The county had lots of potential, we just never had good politicians’ should know that the country does not have good citizens,” the Chupke Chupke actor claims.

“At every opportunity and at every level, we exacerbate corruption. We stock up on goods waiting for the prices to go up. If our people found out Qayamat is tomorrow, they will also hike up the prices of tasbeeh and janamaz with the excuse that we will see about tomorrow when tomorrow comes. Everyone will hoard their money in the wait for Qayamat,” the clip concludes.

Many social media users seem to agree with Arsalan’s thoughts, with one user commenting, “So true! Here, people earn money through the pain and hardship of their fellow countrymen. Blinded by greed, they have now begun to hoard wealth at the expense of someone else’s loss and desperation”

As politicians, civilians, and non-profits come together to raise funds for the rehabilitation of those displaced, unprecedented and historical flash floods caused by abnormal monsoon rains since mid-July continue to wash away roads, crops, infrastructure, and bridges, killing more than 1,000 people in recent weeks and affecting over 33 million.