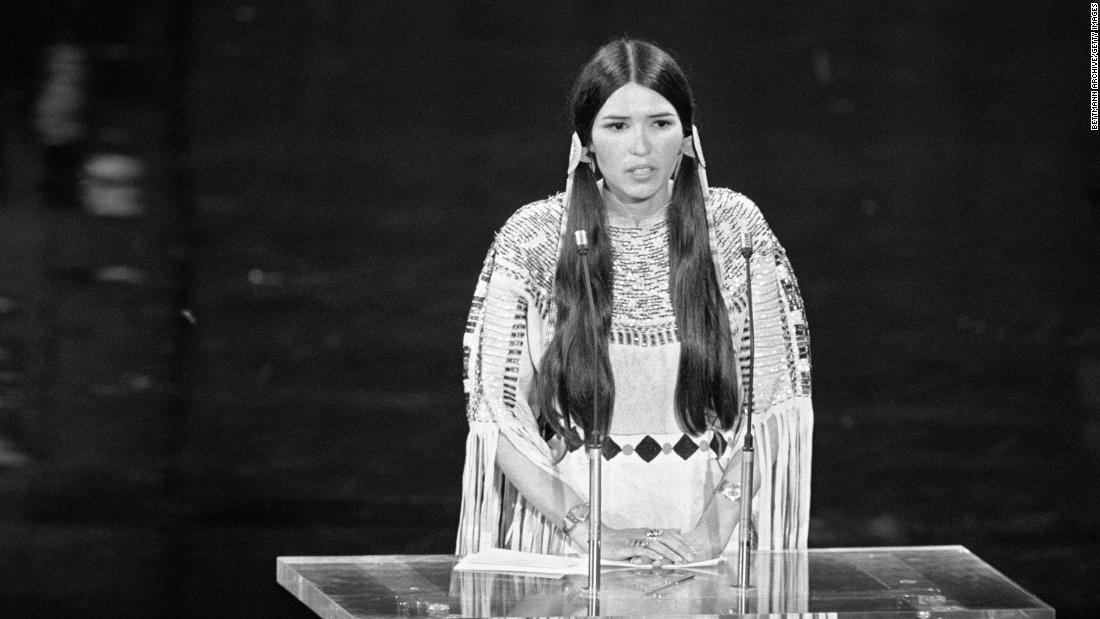 Almost 50 years later, the Academy of Motion Picture Arts and Sciences is formally apologizing to Littlefeather for the mistreatment she experienced during her speech and in the years to follow.

“The abuse you endured because of this statement was unwarranted and unjustified,” Academy President David Rubin wrote in a letter to Littlefeather. “The emotional burden you have lived through and the cost to your own career in our industry are irreparable. For too long the courage you showed has been unacknowledged. For this, we offer both our deepest apologies and our sincere admiration.”

In a statement, Littlefeather called the upcoming event, during which she’ll receive the apology in person, “a dream come true.”

“Regarding the Academy’s apology to me, we Indians are very patient people — it’s only been 50 years!” she said. “We need to keep our sense of humor about this at all times. It’s our method of survival.”

Several Indigenous artists will perform during the event for Littlefeather, including Bird Runningwater, co-chair of the Academy’s Indigenous Alliance, and Virginia Carmelo, a descendent of the Tongva people who will lead a land acknowledgment.

“It is profoundly heartening to see how much has changed since I did not accept the Academy Award 50 years ago,” Littlefeather said.

Her speech earned boos and applause

When Brando won best actor for his starring role in “The Godfather,” he was absent. In his stead, he asked Littlefeather, then an actress and activist, to attend the ceremony — and to refuse the award on his behalf.

Taking the stage quietly and calmly in a buckskin dress, Littlefeather solemnly introduced herself as an Apache woman and president of the National Native American Affirmative Image Committee.
“(Brando) very regretfully cannot accept this very generous award, and the reasons for this being are the treatment of American Indians today by the film industry,” she said to a mix of boos and applause, pausing and appearing visibly upset. “I beg at this time that I have not intruded upon this evening, and that we will, in the future, our hearts and our understandings will meet with love and generosity.”
Brando also refused to accept the award due to the federal response to Wounded Knee, when members of the American Indian Movement occupied the South Dakota town but were met by resistance from federal law enforcement. Littlefeather said she promised Brando that she wouldn’t touch the Oscar statuette, she said.
“I focused in on the mouths and the jaws that were dropping open in the audience, and there were quite a few,” she told the official Academy blog, A.Frame. “But it was like looking into a sea of Clorox, you know, there were very few people of color in the audience.”
She also said that John Wayne, the conservative Western star who once said “Indians were selfishly trying to keep (the US) for themselves,” charged at her to “take (her) off the stage,” though he was restrained by security guards.

After the ceremony, Littlefeather said she was “silenced” and struggled to find work in the film industry. She dedicated much of her career post-Oscars to activism and founding performing arts organizations for Indigenous actors.

Despite the condemnation she received from some in Hollywood who disagreed with her defenses of Native Americans, Littlefeather said she received praise and support from leaders like Coretta Scott King and Cesar Chavez.

“I knew I had done the right thing,” she told A.Frame.