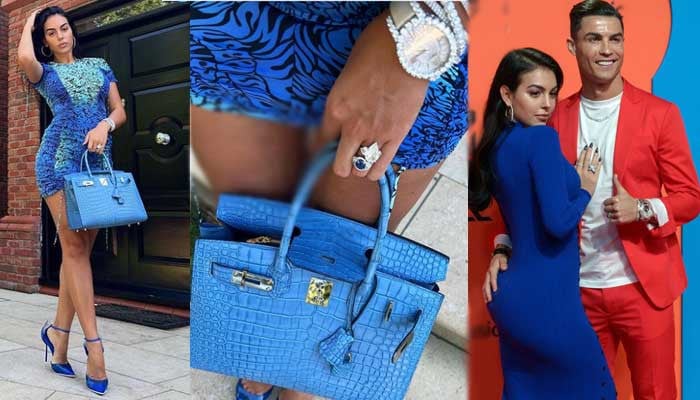 Cristiano Ronaldo’s girlfriend Georgina Rodriguez, who’s one of the most followed models and influencers in the world, stunned onlooker as she put  on stylish   display during outing in Manchester last week.

The mother of Cristiano Ronaldo’s children left everyone in awe with an outfit worth more than 2 million euros.

Taking to Instagram on Wednesday, the Spanish model shared a photo outside their Manchester mansion where she showcased  her  amazing look.

Ronaldo’s sweetheart was looking smashing in a blue dress that, beyond showing off her incredible figure, left everyone open-mouthed when they found out the price of the entire outfit. The post garnered  massive likes and hearts within hours.

In the picture, the Argentinean beauty appeared in a blue Stella McCartney dress worth 1,900 euros. On her feet she wore LeSilla heels worth 765 euros.  The value of the outfit starts to rise when talking about the bag she was carrying, as it was a Hermes worth 94,000 euros.

The most expensive thing she wore was in her hands, two rings and a very pricey watch. The first is a diamond and sapphire ring worth 800,000 euros. The other is a Cartier worth 700,000 euros. The outfit was complemented by a Rolex watch worth 550,000 euros.

As per reports, the sum of all the items she wore for a stroll around Manchester totals 2,146,665 euros, and while most fans will never be able to do the same, it didn’t stop them from showing her their love.

Georgina’s style and relationship with Cristiano Ronaldo always keep her in the media spotlight.