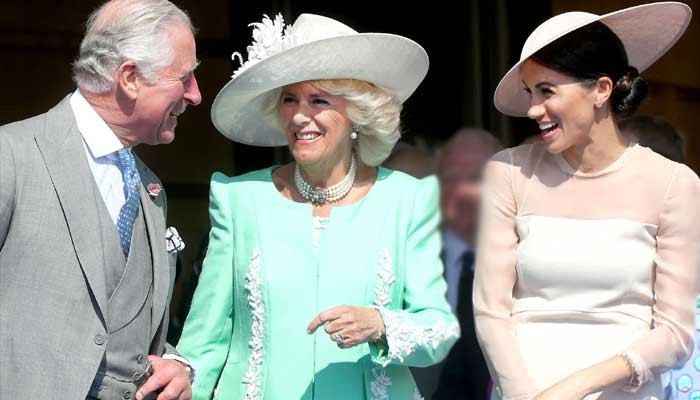 Camilla and Prince Charles’ marriage hasn’t always been “plain sailing” due to the “distance” between her and  Diana’s two sons, Princes William and Harry, a royal expert has claimed.

Christopher Wilson previously claimed that  Camilla has the “support and friendship” of her stepsons on “outward appearances”, but there remains “distance”.

The Queen’s announcement for Camilla to be known as Queen Consort is said to have left Prince Harry and Prince William “completely blindsided”.

Speaking with Us Weekly, a royal author Christopher Andersen said that the news of Camilla becoming Queen one day is “driving a wedge” between Prince in the royal family, in particular with the feuding brothers.

Camilla and Harry were very complimentary in the past. Shortly after she married Prince Charles in 2005, the Duke  said in a BBC interview: “She’s a wonderful woman and she’s made our father very, very happy, which is the most important thing. William and I love her to bits. To be honest with you, she’s always been very close to me and William… but no, she’s not the wicked stepmother. I’ll say that right now.”

In his article for Daily Mail, Richard Kay revealed that Harry invited his late mother’s friends “to share memories and private photographs of her” as the Duke  “especially wanted to know the background to the breakdown of her marriage” to Prince Charles.

Kay went on saying: “It was pretty clear that he did not have a high opinion” of his stepmother.

On the other hand, Harry’s “intimate” and “heartfelt” memoir has caused “considerable anxiety in Buckingham Palace circles” that he will “settle  scores with family members and senior courtiers.”

Meghan accused of driving a wedge between two brothers

While, some blame  Meghan for  reported rift  between the two brothers, Prince William and Prince Harry. Dina’s sons can heal their rift but they will never go back to normal as long as Meghan Markle is in the picture, according to some  royal experts.

“Sadly, I think the only way that things would go back to normal is if Prince Harry and Meghan Markle were to separate and Prince Harry returned to the UK solo,” Kinsey Schofield told the Mirror.

Several other  commentators think that Harry’s living in Meghan’s world and he sees things from her wife’s eyes. Meghan, according to some royal fans won’t let The Duke of Sussex to go back to their royal loved ones.