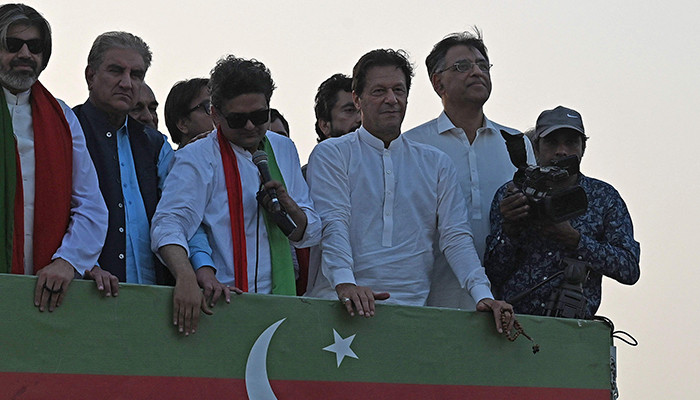 The Ministry of Interior Thursday informed the Supreme Court of Pakistan that PTI Chairman Imran Khan’s response in the contempt case was “factually incorrect and wholly inaccurate”.

The government had filed a plea against Khan for violating the SC’s order during the long march in May, wherein the court restricted him from holding the protests between the H-9 and G-9 areas of Islamabad.

When the SC sought Khan’s response, he told the apex court that he was unaware of any “statement or undertaking” given by his party leadership on his behalf related to the May 25 march.

The interior ministry submitted an earlier report saying that the PTI chief knew about the court’s orders, but in a new submission, it has provided detailed evidence to back its claim.

In the latest response, the Ministry of Interior has provided tweets, video messages, and call records to the Supreme Court, showing that the PTI chief and his leadership were well-aware of the orders.

The ministry said through its evidence, “it is evident that false and incorrect statements” have been made before the court by Khan as he and his party “willfully, intentionally and in contemptuous disregard of the order, engaged in urging and leading the supporters and workers to reach D Chowk, inter alia, causing loss of property and violating fundamental rights of the public at large”.

It further added that the PTI chief has assured the apex court of following its orders in letter and spirit, however, the acts of the former prime minister indicate otherwise.

The ministry said that the PTI submitted an application to on May 23 hold a jalsa on May 25, but the district administration rejected the application. It added that despite not having permission, the PTI still marched on.

In view of PTI’s disregard for the orders, the ministry urged the apex court to initiate contempt proceedings against the former prime minister.

On October 13, the federal government filed a contempt of court plea against PTI Chairman Imran Khan in the Supreme Court over his long march call to Islamabad.

In its petition, the federal government told the apex court that the PTI chief is making announcements of marching towards Islamabad, which was a violation of a court order.

“Imran Khan is making announcements to attack Islamabad,” says the plea. It urged the top court to direct the PTI chief to ensure the implementation of its orders related to protests and sit-ins.

The petition has been filed by the interior ministry on behalf of the federal government.